Yellow (or An Old Man And His Kite) 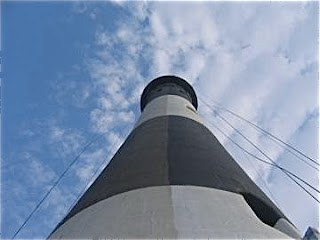 There are moments in our life when we are struck with a pristine moment of awareness - where we are suddenly taken out of our comfortable confines and deposited someplace strange and all together curious. Some call this an epiphany; artists might call it inspiration. Anything can evoke it: A sight, a sound, a scent. What often follows is a realization. Knowledge is acquired in an instant that seems far deeper than can be instilled by years of disciplined study.

I walked across the hot asphalt of Field 8, a parking lot adjacent to one of Fire Island's many beaches, making my way toward the ocean. I had seen the kites soaring over head as I drove up, but as I returned from walking to the lighthouse with a friend, I found only one lone kite remained: A bumblebee. The man flying the kite was an elderly man, quite old to be out on the blustery beach alone. He stared up in amazement at the fluttering kite, reveling in its mischief.
I suddenly became aware of that moment, aware of the joy with which he must have traveled, anxious to watch the kite thrust airborne. I imagined him hobbling into a local hobby store, perhaps a regular, purchasing the crisp, new, polyester kite, anxious to tether it into the air. From a mere glance, a peaked interest that burst into a vivid revelation, I gained a deeper understanding of myself and my connection to the world. I became aware of his fascination, his appreciation, and his general sense of wonder as he stared up at the dipping kite.
And in the same instant, I became aware of our relation to each other. Our shared humanity. The quaintness of the scene made me appreciate the day so much more, bringing into perspective the beauty of the waves, the placidity of the sand, and the uniqueness of the people around me. My third-person observance of this man's personal relationship with flight made me savor my existence so much more.

Search always for those moments which attest to your gift of humanity. They are all around you.

Yellow (or An Old Man And His Kite)

The trunk of the Buick
Parked
In the handicap space
Is ajar,
Not far from the crashing surf
Of Fire Island.
A man sits,
Cane within reach,
Nestled in the space between
Oilcan
And tire jack.
Gripped in his aged hands is a fishing pole:
Makeshift,
With a majority of its length cut away;
Electrical tape scores the grip.
Attached to the line is a kite
That soars high above his head.
A little yellow kite,
In the shape of a bumblebee,
Dips and croons in the blustery air,
Drawing his drooping gaze skyward,
His jaw slackened
In awe of the majestic feat.

He channels Da Vinci’s preoccupation
Without the ambition of the Wrights,
Baiting the world’s breath with his kite,
Though he never catches anything
But a deeper fascination.
Posted by The Sven-Bo! at 10:04 AM No comments: Links to this post